Deer Industry NZ says a draft of an updated Deer Code of Welfare, released on Friday for public comment, is a positive forward-looking document.

“Most of the proposed changes to minimum standards are based on good farming practice. However, there are a few changes that will need further consideration by deer farmers and veterinarians who have experience with farmed deer,” says chief executive Innes Moffat. 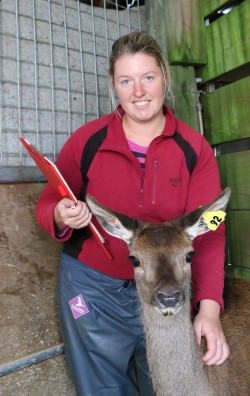 Southland farmer Kate Roberts with a young deer. Because of existing high standards of animal welfare, the new code will not mean many changes for most deer farmers.

He says the deer farming industry is well-known for its high standards of animal welfare. So the release of the revised Code is not a reflection of welfare concerns. It is simply the latest in a long list of Codes of Welfare for farm animals to be updated.

“The Code had a minor update 2018 but most of the provisions have not been reviewed since 2007. This current review will stand us in good stead for at least the next decade.”

The revised Code has been drafted by the National Animal Welfare Advisory Committee (NAWAC) after consulting with DINZ, deer veterinarians, the Ministry for Primary Industries, animal welfare lobby groups and experts in animal welfare.

“We are pleased the Code clarifies the duties and responsibilities of farmers. Proposed changes to include minimum standards for milking deer, an initiative that has been developed since the last Code was written,” he says.

“There’s more guidance on mating management, managing deer in enclosed spaces and a requirement for all farmers to have a written up-to-date animal health plan based on veterinary advice.”

As part of its review NAWAC is proposing a regulation prohibiting the use of electro-immobilisation devices on deer. Moffat says DINZ will support this change as these devices are not suitable for deer and their use has long been discouraged.

“We will also support the NAWAC recommendation that there be a new regulation requiring that where deer are managed in intensive winter grazing systems, clean drinking water is available in the grazing area at all times. This is simply a reflection of good farming practice.”

During October DINZ will be consulting with deer farmers before drafting a submission on the Code. Moffat strongly encourages farmers and others whose work involves handling deer, such as deer vets, transport operators and stock agents to read the draft code and to make their own submission. Submissions close at 5pm on 10 November.

Once consultation is complete and the Code is gazetted, DINZ will be making sure everyone in the industry has access to the new Code and is familiar with the expectations and requirements for handling and managing animals.

The draft Deer Code of Welfare is here: mpi.govt.nz/consultations/proposed-code-of-welfare-for-deer