Deer industry wants to stay in the climate conversation


Deer Industry NZ (DINZ) supports the decision of the He Waka Eke Noa (HWEN) partners to submit their recommendations to the government. But it continues to have concerns about the potential for greenhouse gas (GHG) pricing to have a severe financial impact on some deer farms.

An independent analysis of the impact of greenhouse gas pricing on actual deer farms is available here >> “Finding ways to reduce emissions from food production, without threatening the viability of our farmers, is one of the most important issues that society has to deal with. Deer farming, as one the country’s most innovative farming sectors, needs to be part of that conversation,” says DINZ chair Ian Walker.“No other country has gone as far as New Zealand in the development of a pricing mechanism for greenhouse gases from agriculture. It’s a massive challenge, especially for an economy that’s largely reliant on farming and forestry for its living.”He says the HWEN report emphasises that emission levies should be set at a level that is sufficient to drive emissions reductions and increase sequestration, while being as low as possible so the primary sector remains profitable.“The report says several factors need to be balanced when the government sets GHG levy rates. These include the need to reduce emissions; whether cost-effective mitigations are available; the social, cultural and economic impact of levies; and the risk that a high levy could result in production shifting offshore, leading to higher global emissions,” Walker says.“In our board’s view, levies must not be used as the sole means of driving a reduction in on-farm emissions and adaption to climate change. Especially when there are no cost-effective mitigation technologies available for our farmers to adopt. A holistic, whole-farm approach is needed that will encourage and incentivise farmers to adopt new technologies when these become available.”Walker says that DINZ, by being part of HWEN, has been able to successfully advocate for changes to earlier drafts of the recommendations report.“The most significant of these is a provision for levy relief for those farms that, because of national and local body regulations, are unable to plant trees for carbon sequestration and have no access to effective mitigation technologies. This will be welcomed by deer farmers in districts where you cannot plant exotic trees because of the need to preserve outstanding natural landscapes and prevent the spread of wildlings,” he says.“Unfortunately, there is no levy relief recommended for hill and high country farmers where tree planting is ruled out by climate or soil type alone.“The HWEN recommendations will not be welcomed by farmers in this situation – the only consolation is that they would be much worse off in the government’s ‘backstop’ option of putting farming directly into the NZ Emissions Trading Scheme.”Walker says the recommendations envisage that income from carbon sequestration in tree plantations and the restoration of native vegetation will buy time for new methane and nitrous oxide reduction technologies to be developed and implemented.He says DINZ will continue to advocate for relief for farmers who don’t have sequestration options, but who are otherwise managing their on-farm environment responsibly.“Improving water quality and better protecting native biodiversity have been a major focus for the deer industry for more than 20 years. Our farmers take great pride in what they have achieved,” he says.“It is a major anomaly that low-intensity hill and high country deer, beef and sheep farms with low fertiliser or feed inputs, but with great water quality and native biodiversity and vegetation, will be likely most affected by a carbon charge.”As a partner in HWEN, DINZ has been able to initiate a review of the formula for calculating deer emissions, which unduly penalise deer. It is also seeking to get emissions charges for deer balanced fairly between venison and velvet. At the moment the burden falls solely on venison.Walker says “We agree that, along with all other sectors of society, the deer industry must play its part in reducing our greenhouse gas emissions. We agree that farmers should help fund development of agricultural GHG mitigation technologies and their adoption.”“But this must not imperil the viability of deer farming as a food producing industry. Our farmers want to remain profitable as deer farmers – they have no wish to become carbon foresters or traders. Nor is it in New Zealand’s interests for this to happen.” 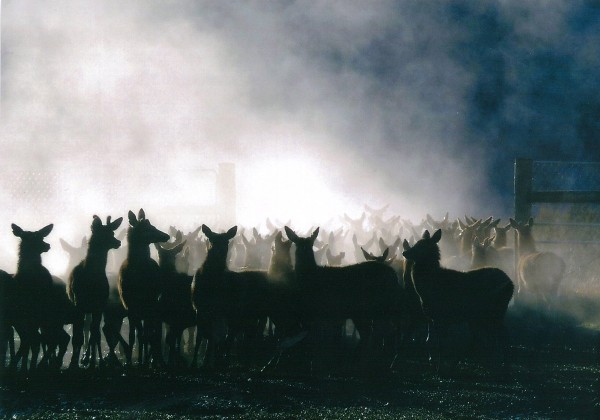 The deer industry agrees it must play its part in reducing greenhouse gas emissions, but says this must not imperil the viability of deer farming as a food producing industry. Photo: Doug Andrews