First Light’s New Zealand venison has been ‘Cooking with fire’ in the US recently. The marketer has already doubled its venison volume heading to the US this year and its first production of cuts has just rolled out of Atkins Ranch for Force of Nature. 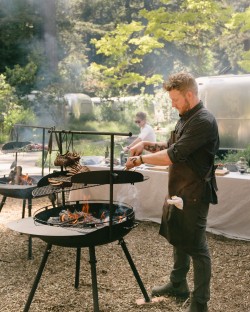 Professional US chef Kevin O’Connor preparing the venison for the ’Cooking with fire’ event.

Twenty-five key restaurateurs, chefs and meat influencers attended an outdoor ‘Cooking with Fire’ event in Sonoma, near Los Angeles, California in July. They were there to learn more about barbecue cooking of First Light’s New Zealand venison, alongside its Wagyu Beef.

The meat influencers were also sent a pack of venison afterwards, to cook themselves. First Light general manager venison Matt Gibson, says the exporter has received good feedback as a result.

First Light’s activities in the US have been supported by the P2P and also the DINZ Marketing Innovation Fund.

The positive story continues from the US for First Light, which has already doubled the volume of venison it is exporting to the US and is now “having conversations with two or three independent retailers in the US about two or three venison products,” says Matt.

“Venison interest in the USA is still strong and will be good to get another big retailer underway to continue increasing volume turn over.”

Venison 8-rib rack is one of the cuts featured on the front end of First Light’s US online General Store.

“We’re making solid process, backed up by a number of our alternate markets, which is helping the overall picture,” Matt says.

Logistics issues – getting containers and finding storage on the US west coast – however still feature in day-to-day business.

Repeating a message he was relaying at the DINZ Road Trip events last month, Matt is confident the exporters are delivering on the diversification of markets.

This means when things are tough in one, product will be able to be moved sustainably to another better paying one.

“It’s a long-term project, that is not going to happen quickly. We are making incremental and positive change.”

For him, proof that the diversification strategy is working is the lifting in farm-gate prices which , according to this week’s published schedules, are between $8.05-8.25/kg – hovering around the five-year national average for July of $8.11/kg. Exporters are aware prices need to be going upwards to hit the long-term goal returning $10-11/kg at the farmgate for the chilled season.

“But, that means incremental increases, not erratic and jumping from one to another market, and being fair on those price increases.”

With the support of the DINZ Marketing Innovation Fund, First Light has produced a series of recipe videos featuring Matt Gibson showing Americans how to cook different cuts on the barbecue, in this case tri-tip. “If you’re looking for a transition from beef to venison, this is it,” Matt tells them.