Spontaneous outbreak of enthusiasm in the shadow of Covid


It may have been a bitterly cold day in much of the country, but a good number of Kiwis dusted off their barbecues and cooked a venison-based meal on Saturday 7 August, the world’s first Venison BBQ day. 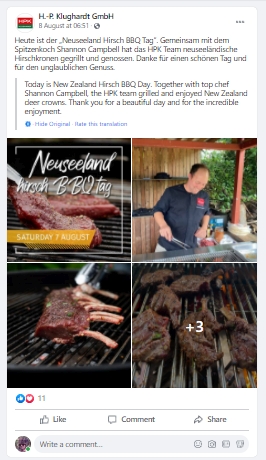 DINZ venison marketing manager Nick Taylor says there were 250,000 on-line engagements with #nzvenisonbbq, many from home cooks hoping to win one of 30 farm raised venison BBQ packs put together by Merchant of Venison Ltd and Mountain River. The winners were randomly selected from entrants who posted photos or videos of their venison BBQ dish on social media.

“The day was organised at short notice. Mountain River’s Hunter McGregor came up with idea, I discussed it with a few other deer people and we agreed to ‘let’s do it’. Venison is such a great meat to BBQ and there are many folk out there who don’t need much of an excuse to get it on the grill,” Taylor says.

“Our marketing promotions are normally planned in detail, months in advance. This one was spontaneous, fun and successful. You can be sure there will be many more annual Venison BBQ days in the future.”

All of the promotion was via social media – Facebook and Instagram – mainly in New Zealand and Europe. McGregor was of course cooking up a storm at his home in Shanghai and the Mountain River team got a buzz going with their distributors in the United States.

The promotion in Europe will hopefully have helped set the tone for the upcoming traditional northern hemisphere game season. Game dishes – many of them based on NZ farm-raised venison -- start appearing on northern hemisphere restaurant menus once the weather cools in late autumn.

Game season demand has been severely hit by a major fall-off in restaurant sales during the Covid-19 pandemic. The severe impact of this on prices to farmers is leading to growing farmer concern.

In response to a ‘please explain’ letter from the executive committee of the NZ Deer Farmers Association, the major venison marketing companies express their long-term confidence in venison, but do not expect a return to pre-Covid prices this season.

The good news is that high frozen stock levels carried forward in Europe from the 2020 season are being cleared and that the game season supply contracts currently on offer are minimums. Distributors in Europe are cautiously optimistic about demand but are very conscious that restaurants have sustained big financial losses during the pandemic and are not taking any risks.

In the words of Andrew Duncan, executive chair of Duncan New Zealand, the current season’s venison price of around $5.50 a kilo through the off season, to over $7.00 in the recently released game season contracts, fully price venison on today’s market levels.

“However, we totally agree that these ‘tramlines’ are not sustainable going forward beyond 2021, and in fact represent an industry that is only part way through the recovery process. Market inventory from 2020, global shipping disruption, and a still pressured hospitality sector, are all reasons venison is not yet back to financially sustainable levels.