Summer for Cervena in Europe | Issue 178


There’s plenty of Cervena™ venison for Belgian barbecues this summer, with Alliance doubling its exports for the launch of a brand-new range of chilled packaged cuts.

Alliance and Bimpex are continuing the work started in the Summer Cervena programme, which has now transitioned out of Passion2Profit and is being supported directly by DINZ promotion funds.

Ready to go straight onto the barbecue are marinated kebabs, tapas brochettes, venison cutlets with a Louisiana BBQ, fillet with a jerk spice rub, plus ‘natural’ steaks and fillets without marinades, among others. 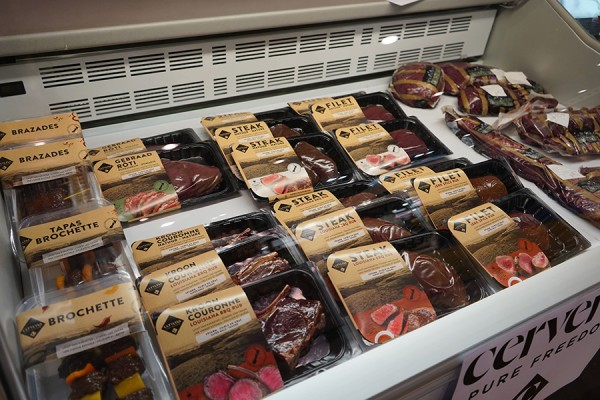 Some of the new Alliance range of packaged venison cuts for Belgium’s gourmet butchers launched at Tavola trade fair, with some of the sub-primal Cervena cuts offered to wholesalers in the right of the chiller cabinet.

The Cervena range was launched at the Tavola trade fair in Kortrijk, Belgium in March and has been received well by the targeted customers, the gourmet butchery trade, reports Alliance sales manager Katrina Allan.

“Bimpex likes to have something different to offer at this time of year, when we haven’t been able to move venison traditionally. It gives them a different focus and their people are passionate about the good product that’s great on the barbecue.”

The packaging, which promotes New Zealand grass-fed venison and carries the Cervena logo, also ensures the meat retains its colour.

“Feedback has been great,” says Katrina, who adds Alliance is doubling its exports for the sales period over last year, from May through to September. Prices have been, “steady, as expected,” she says.

PR activity is supporting the promotion campaign, including three barbecue contests. One was held around Easter in late April, the second will kick off this month for Spring and the final one will be the World Championship barbecue in September.

Chilled venison has been selected and prioritised for the promotion by Alliance and supplies have been going out in the co-operative’s multi-species containers every week since February, naturally ageing en route to market.

“We’re getting it out of the door as quickly as possible, so it still has plenty of shelf-life left when it gets there and it’s a great product.”

The cuts are packaged in Belgium, which means the team can respond quickly to market demand, by shifting cuts as required. They also supply product for wholesalers as well, destined for the restaurant trade.

Cervena venison cutlets with a Louisiana BBQ rub from Alliance.

Logistical challenges remain an issue, but after a long time in lockdowns, the good news is that Covid-19 restrictions are lifting in Europe and restaurants are re-opening.

“People want to get out and about or get entertaining or show off something new at summer barbecues at home,” says Katrina.